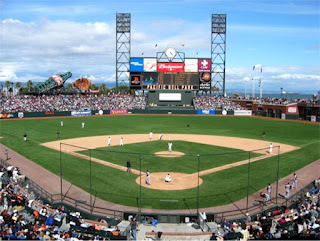 Single girls dislike striking out just as much as we dislike foul balls, or God forbid, breaking balls.  So how do we stay ahead in the count?

Overall, home teams have won about 54% of their games since the advent of the 20th century.  Last year, home teams won 57% of their games, a 3% increase from the year before.  With so many home team wins, is it any wonder that single girls like having home field advantage?

Single girls like playing at home because our "stadium" is generally better than his.  Our facilities bathrooms are usually cleaner, and we enjoy our natural grass and a softer turf 500 thread-count Egyptian cotton bedding rather than his Astroturf mismatched sheet set.  We understand his stadium might have gotten a little worn down with so many different teams playing - it's typical of multi-purpose venues like the Oakland Coliseum.  But we would be more amenable to traveling to his stadium if he does as the New York Mets did and move into a brand spanking new place like Citi Field.

Obviously, an advantage of being the home team (other than choosing our unforms outfits) is that we generally perform better at home.  Maybe we've been comfortable enough to get to first base and have even stolen second base several times earlier in the season.  But when we're playing at home, we really like to get ourselves into scoring position.  We want to round all the bases, get that home run, earn that squeeze play, and maybe even hit for the cycle.  (Hitting for the cycle is rare, though.  It has happened only 288 times since the late 1800s, and I was lucky enough to witness this occur in person two years ago with Mark Ellis.  Yes, that's what she said.)

Being the home team is also advantageous because of our familiarity with the playing grounds.  Single girls like to wake up in the middle of the night and navigate our way to the bathroom in the dark without worrying about tripping over foreign objects.  When we are traveling as the "visiting team," we may not have the luxury of popping out of bed in the morning before he wakes up to brush our teeth, smooth our hair, and fix our eyeliner and mascara before climbing back into bed, pretending that we just naturally wake up like this and not some raccoon-eyed, disheveled bedheaded mess with dragon breath.  (A serious error, right there.)  We think it's rather unfair that boys wake up adorably rumpled.

Not having to travel is quite a luxury, especially when it takes us hours to get home from a visting team.  (It's a nightmare leaving even the parking lot at Dodger Stadium!)  And one thing single girls seriously dislike is the "walk of shame."  We don't know what is more harrowing: walking around willy nilly at 9am trying to avoid his neighbors/roommate in a short cocktail dress and 4" heels with dark circles under our eyes, or trying to sneak out of his place in the middle of the night and figuring out how to unlock his front door without waking him after we went into extra innings.

So how do single girls feel about home field advantage in the postseason?  Well, I guess that depends on who won the All Star game.
Posted by Single Girl 1.0 at 7:52 PM

Email ThisBlogThis!Share to TwitterShare to FacebookShare to Pinterest
Labels: hooking up, sports