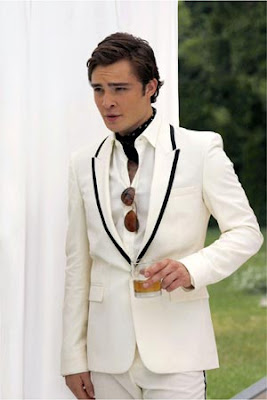 After a little bit of fact-checking, we did confirm that Chuck Bass is indeed 18 years old, and ergo, there is nothing illegal about us single girls liking Chuck Bass.

Now some of you may be unfamiliar with Chuck Bass and to that, I say, "For shame!"  As the antihero of the CW's drama series Gossip Girl, Chuck Bass is a teenage billionaire and the Upper East Side's resident playboy.  He is charming, well-dressed, handsome, and although his salacious behavior is questionable, he is a single girl's guilty pleasure.  And did we mention he's rich?

Single girls are notorious for liking the wrong guys - bad boys, assholes, douchebags, jerks.  (Can we help it that all the "normal" ones are getting themselves married off on match dot com?  Idiots.)  Our grandmothers had Marlon Brando in The Wild One, our mothers had John Travolta in Grease, we have Chuck Bass.  Who needs motorcycles and leather jackets when Chuck Bass has limousines and Armani suits?

Chuck's sexploits have become so legendary, Britney Spears dedicated a song to him in the form of "Womanizer."  (He's kind of a big deal, y'all!)  He may only be 18-years old, but Chuck seems to be quite the experienced young lad, and this is something single girls definitely like (especially since dudes reach their sexual peak between 18-22).  He puts the F in OMFG.

Chuck's pick-up line is simply: "I'm Chuck Bass."  And it works!  Every time!  You see, his (so bad, it's good) reputation obviously preceeds him.  Billionaires can be quite influential.  And clever.  And manipulative when provoked.  When Chuck isn't getting himself out of a sticky situation by paying off the NYPD, he's getting his friends out of sticky situations by putting them on one-way flights to South America (on his private jet, no less).  Bernie Madoff needed Chuck Bass in his corner.

Single girls like a guy who knows his labels.  Chuck was bred to prefer Dom Perignon over Cook's, Wolford over Leggs, and Valrhona over Hershey's.  Impeccably dressed (in a three-piece Prada, of course) and perfectly coiffed, when we meet a guy who can take care of himself, that leaves us more time to take care of ourselves.

Ok, so what if he's a man-whore?  So what if he likes deflowering high school girls in the back of his limo?  So what if he has a douchey demeanor?  So what if he kissed a boy?  It's hard being a billionaire in Manhattan!  His mom died giving birth to him!  His dad has been marrried several times, and then died suddenly in a freak car accident!  He's an orphan!  His best friend is dating the girl he is in love with! His uncle is trying to steal all his money!  This guy has ISSUES!!  And let's not forget that his stepsister is Serena van der Woodsen.  She has even more issues than he does!  We give his "flaws" (understatement of the year) carte blanche because, he's, well, Chuck Bass.

I mean, really, how can we resist his smoldering glare, his chiseled jaw, his arrogant charm, and the fact that he owns a hotel?  What other "bad boy" will take us to Bendel's and Bergdorf in his limo while sipping on Dom the whole day?