#50 The Irrelevance of "Relationship Weight" 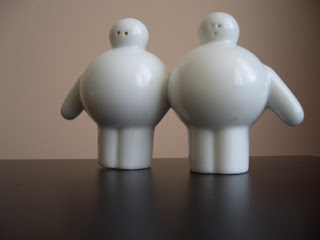 Single girls have all seen this happen: a "single" girlfriend (generally of the serial monogamist variety) meets a dude (probably on match dot com), starts dating him (exclusively), disappears from our lives (predictably), then reappears (undoubtedly with the boyfriend) ten pounds heavier.  (Or 20 pounds, collectively with the boyfriend.)

Gaining weight is no mystery to single girls, hence the calorie counting, so we devote some time at the gym to maintain a figure that would mobilize certain (preferably single) dudes to ask us out.  Think about it: if a guy had to choose between you or a ten-pound heavier version of you, which would he choose.  (This isn't rocket science, kids.)

This concept of "relationship weight" (and we're not talking about just a couple of pounds here) is so foreign to single girls, we cannot begin to comprehend how our non-single friends can gain so much weight that they admit to purchasing new slacks a whole size (or two) up.  Not fitting into Italian sample sizes already gives me grief, imagine rehauling my whole wardrobe?  Mio Dio!

So how or why do couples get fat together?  A single girl's hypotheses:

- Relationship people do not have sex.
Ironic, if you think about it.  You would think couples actually, well, "couple."  A friend once told me of a couple he knew who only had sex once a week: Saturdays at 4pm.  If relationship people don't have sex, maybe have little to no desire to look good naked like us narcissistic single people.

Non-single girls are comfortable eating in front of their boyfriends.
Now that she's in a secure relationship, a non-single girl doesn't have to worry about eating too much on a date for risk of looking poochy/having food baby and not getting laid (she won't anyway) like us single girls.

- Relationship people spend too much time at home.
Why do we never see our non-single girlfriend?  She's spending all her time nesting with the boyfriend at home.  Couples like cooking for each other and overeating together.  And since they're at home, this means they're probably wearing sweatpants all the time so they REALLY have no idea how much their waists are expanding.

- If they're not at home, relationship people have twice as many social engagements to attend.
Since there's two of them, a couple generally gets invited to twice as many birthday dinners (food), barbecues (food), weddings (food), Thanksgivings (FOOD), and other celebrations/holidays (more food).  Double the social calendar, double the calories.

Whether these hypotheses are true or not (I mean, what do I know?  I'm Single Girl 1.0), gaining weight is so repulsive to single girls, the idea of putting on "relationship weight" gives us enough motivation to remain single.
Posted by Single Girl 1.0 at 11:38 PM