#36 Our Love/Hate Relationship With Romantic Comedies 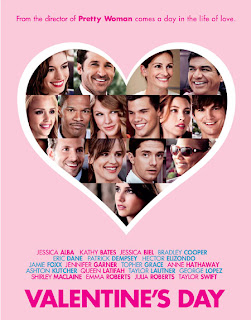 While I was rather taken by the film (Bradley Cooper!  Eric Dane!  Patrick Dempsey!  All at once!) and thought Garry Marshall created a nice homage to our fair city of Los Angeles, my girlfriend thought it made single girls look like crazy bitches around Valentine's Day.  (Um, because we are?)  Thanks, Jessica Biel!

Single girls have been conditioned to cherish the notion of true love overcoming all obstacles since our Snow White and Cinderella-watching days.  Our first introduction to romantic comedies came in the form of The Princess Bride.  (An easy transition with the princess and handsome hero thing still going on.)  This subsequently led to Pretty Woman, The Cutting Edge, Sleepless in Seattle, and so on and so forth.

Pretty soon, we were mock wailing to friends, "I'M NOT JOSIE GROSSIE ANYMORE!"

For 120 minutes, we sit in blissful ignorance mooning over Hugh Grant or Matthew McConaughey or Ryan Reynolds as they attempt to reunite with their true loves.  And then the GRAND GESTURE!  She is just a girl, standing in front of a boy, asking him to love her!  And then we cry about it.  WE CAN'T HELP IT!  WE HAVE BEEN BRAINWASHED TO DO THIS!  EVERY TIME!  Ugh, it kills me.

Why are we compelled to watch a rom-com on television even though we own the DVD or have already seen it 100 times?  (I never tire of How to Lose a Guy in Ten Days.)  Hollywood studios strategically release their shitty films, generally romantic comedies, around Oscar season.  Because they know WOMEN WILL STILL SEE THEM.  How many more commercials do I have to see for Leap Year or When in Rome?  (I have yet to see either.  For now.)

Single girls love romantic comedies because nothing is better than observing two people find true love and live happily ever after despite all odds.  Never mind that they're actors!  Never mind it's not real!

After the giddy initial reaction that overcomes us from witnessing two people fall in love (again, never mind that they're actors and it's not real), reality begins to settle back in and we fall into a state of post rom-com depression.

We wonder how we will ever find true love if these heroines with the perfect bodies, immaculate hair, amazing apartments, and glamourous jobs are having the same problems we do?  Do they really have the same problems with dating men that we do?  We wonder why all of our life's problems are not resolved in 120 minutes?

Like, really, Jennifer Garner?  Are you actually going to fall in love with your dead fiance's best friend?  Oh, no, J. Lo!  Just your luck, of COURSE you fall for the groom of a wedding you are planning!  I totally want to trade apartments with somebody in England and fall in love with her handsome brother even though he is a widower and has two daughters.

Most importantly, we hate romantic comedies because they lead us to have unrealistic expectations of men.  And the more we date and the more men we are exposed to, the more we realize how obnoxiously unsettling rom-coms really are.  Where are these guys who will tell us "You complete me" or "You make me want to be a better man"?  When will I tell someone to shut up, just shut up, because he had me at "hello"?

Even the "bad boys" in these films end up redeeming themselves.  The jaded and cynical asshole is really heartbroken over a dead wife or a girlfriend/fiancee who cheated on him.  (With his best friend, of course.)  In reality, are we supposed to believe that men are assholes because it's a defense mechanism against further heartache?  Or are they just simply assholes?

The worst rom-coms are the ones that intentionally manipulate our emotions.  Okay, kill Gerard Butler in the second scene and then have his wife go on some international scavenger hunt without him, given various clues here and there from alive-Gerard Butler only to remind us that he is really DEAD.  My friend was bawling every ten minutes watching that film.  (PS I Love You, for you emotional masochists.)

If my love life were a film, it would be an epic romantic disaster with nuances of horror and comedy.
Posted by Single Girl 1.0 at 7:45 PM