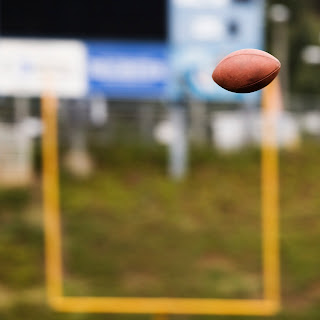 Nay, much like Christmas, Easter, Groundhog Day and Valentine's Day, Super Bowl Sunday has been literally commercialized.  What was once a sacred day that revered talent, athleticism and sportmanship has now been preceded by socializing, drinking and watching lingerie models tackle each other.  (Gotta love the Lingerie Bowl.  Or not.)

Frankly, some single girls don't care which team wins, let alone know which teams are PLAYING, because most of us don't even follow the NFL.  After 16 regular-season games and three rounds of playoff games in blissful ignorance, some of us are probably rooting for the team with the cuter quarterback (hands down, Drew Brees despite that weird thing on his cheek) or the better uniform colors.  (Black and gold, or blue and white?  Decisions, decisions...)

Unfortunately, there are still some of us who can't differentiate a touchback from a touchdown, a forward pass from a lateral pass, or a first down from a fourth down.  But single girls still enjoy an epic Super Bowl party for various reasons.

Reason #1: FOOD
Did you know that next to Thanksgiving, Super Bowl Sunday is the second largest day for calorie consumption amongst Americans (according to the US Department of Agriculture)?  Single girls can't count calories very well when we're in a social setting.  Between the beer swilling, handshaking, smiling, and joking, our mental calorie counters can't capture every tortilla chip we chew, every chicken wing we nibble, or every cookie we inhale.

Super Bowl Sunday is the "calorie Sabbath."  Thus, we do like the 49ers did in 1990 against the Broncos and rack up those (Weight Watchers) points.

Reason #2: TOM BRADY
[insert swoon here]  He won three out of four Super Bowls (2002, 2004, 2005) - and not just due to his dreamy good looks!  When he's not showcasing his talents on the field, he uses them off the field to impregnate actresses and bed super models.  He is a single girl MAGNET, and I know some single guys secretly have a man crush on him.  Why not call the Super Bowl what it really was those four years?  The Tom Brady Show.

Reason #3: NIPPLEGATE
Ever since the year of Janet Jackson's infamous "wardrobe malfunction," we have been secretly hoping for another halftime show scandal.  Single girls love a good scandal!

Unfortunately, subsequent performers including The Rolling Stones, Tom Petty (& The Heartbreakers) and even Prince could not deliver the same "controversial" mayhem that ensues when Americans see a pastie on national television.  It was the boob that launched a billion TiVo rewinds!

Reason #4: COMMERCIALS
Some of us may not have much of an opinion on a play when a yellow flag is thrown on the field, but we do like expressing our opinions on the $3 million commercials that air during the Super Bowl.  Those GoDaddy dot com commercials?  Total fumble.  On the other hand, much like the Dallas Cowboys of the 1990s, Budweiser generally puts on a solid show.

Reason #5: DUDES, Observing
There is something strangely fascinating with watching men watch sports.  With women, guys often confuse being emotional to being "crazy."  Well, how "crazy" do guys get screaming at their favorite sports teams after a bad play, weeping during a championship win, or sobbing after Brian's Song or Rudy?

We know exactly how Jane Goodall felt while observing chimpanzees in Tanzania.

Reason #6: DUDES, Hooking up with
While his favorite team is scoring points on television, we are hoping to score points with him by saying things like "Not another turnover!   They can't afford to do this at the SUPER BOWL!"  Yes, some fans may care who goes home with the Vince Lombardi trophy, but what single girls really care about is who we could potentially go home with.

Seriously.  With all that talk about "covered tight ends," various "positions," "long drives," and "penetration," how are you NOT turned on?
Posted by Single Girl 1.0 at 7:49 PM