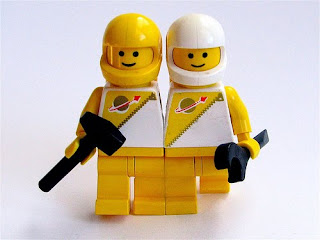 We've all run into this problem before, some of us more often than most. (Me? Definitely more often than average.) We meet a guy with an annoyingly common name (ie. Brian or David) and when we're telling our girlfriends about said guy during Sunday brunch, they don't know if we're talking about Brian 1.0 or Brian 2.0. This proves to be ingratiatingly confusing, especially after a few glasses of mimosas.

Sure, it's easy to name them David #1 or David #2, but things get a little tricky after you meet a David #3. Equally disturbing is when David #1 re-enters your life years later as David #4. (He claims to be a "changed man," ergo a new David.)

Those repetitively explanatory conversations can easily be avoided with nicknames. We have a vested interest in saving time and energy from differentiating Tim #1 from Tim #2 when there are clearly more important topics to discuss such as "What did Tim #2 REALLY mean when he said 'I will call you later.'"

Nicknames are designated using unique details about dudes.  A nickname is easily contrived if he comes from somewhere foreign like Germany, South Africa, or Alabama. Thus, his new moniker is "The German," "The South African," or "The Redneck," respectively.

Single girls also like unusual occupations. Not only does having an unusual occupation make you easier to Google stalk, unusual occupations make classifying him a piece of cake. (Mmmm...cake.) College basketball coach? Magician? Firefighter? Scoreboard technician? Butcher? Baker? (No, seriously, is there cake?) Candlestick maker?

So he's not foreign and he's a "consultant"? Never fret, it might not be as easy, but we'll figure out a way to distinctly christen this newbie - whether it's from his choice of wardrobe, the car he drives, his political or religious views, or the man bag - excuse me, satchel - he's carrying.

But Single Girl 1.0, you say, since you love learning last names so much, why don't you just refer to dudes by their last names so you don't get all your Marks confused?

Frankly, some single girls have faster trigger fingers than others, and may be dating multiple guys one month and then going through a completely different batch the next.  Because of this high turnover, it's not worth the storage space in our pretty heads for us to remember that "Smith" = "Pilot" simply when "Pilot" = "Pilot."  So when we speak of dudes with our girlfriends, referring to him as "Smith" means nothing to them when there is no identifying qualifier.

Plus, we know dudes like using nicknames just as much as we do. How else would their buddies distinguish ex-girlfriends as "That Crazy Ex #1" from "That Crazy Ex #2"?
Posted by Single Girl 1.0 at 7:57 PM