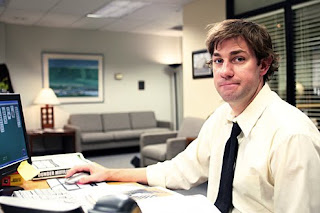 Most of you recognize John Krasinski as "Jim Halpert" from that Emmy award-winning television series, "The Office."  Some of you may recall seeing him as Mandy Moore's fiance in that silly romantic comedy License to Wed with Robin Williams.  Then there are those of us who remember him as the guy who fills the "cute quota" in Jimmy Kimmel's Handsome Men's Club.  (He can be our big handsome.)

Whichever way we prefer to know him, single girls like John Krasinski because he is unarguably affable and charmingly adorable.  He is the kind of boy we bring home to introduce to our mother.  We want him to be the Jim to our Pam.

Despite his exaggerated features, his nose is a bit grandiose and his ears tend to stick out a little too far, his strong features make him handsome enough to be swoon-worthy, but not so attractive that sluts are throwing themselves at him.  Plus, he seems to be the kind of guy who would be too shy or goofy to do anything about it anyway.

In essence, John Krasinski is the anti-douchebag.  And isn't it about high time us single girls avoid the douchebags and pursue the sweethearts?

Ultimately, John Krasinski could do no wrong.  His perpetual "aw shucks" look prevents anyone from ever blaming him for committing a mortal sin - he could probably get away with murder and mayhem merely by shrugging his grand shoulders and flashing his trademark apologetic grin.

In our daydreams, John Krasinski is the guy who holds our hand and takes us on picnics in the park where we could lie on our backs and make shapes out of clouds.  He is the guy who tells us the best part of his day is waking up next to us in the morning.  He even sincerely insists it is our most attractive moment.  (And because John Krasinski does not lie, we know this is the truth.)  He is the guy who brings us breakfast in bed where we can do the New York Times crossword puzzle together.  (He graduated from Brown with honors so we know he's a smart dude.)


If we were with a guy like John Krasinski, he would never give us a reason to write him a "Dear John" letter.  Aside from being engaged to Emily Blunt, John Krasinski is perfect. 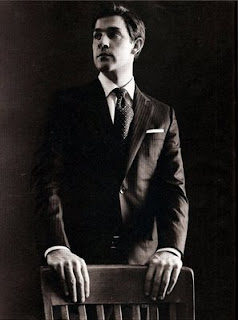