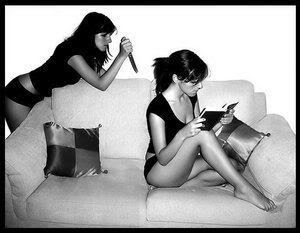 According to our friends over at Mirriam-Webster, a "frenemy" is one who pretends to be a friend but is actually an enemy.  As likely as it is for a single girl to have a crazy girlfriend in her entourage, it is not uncommon to have a frenemy (or two) waiting in the wings as well.

Our frenemy is the Betty to our Veronica, the Serena to our Blair, the Paris to our Nicole.  We can't live with her, but we can't live without her.  She is the one we wake up loving in the morning but go to bed hating at night.

Backhanded compliments and sabotage are her specialties.  She convinces us to wear the less flattering outfit so she could look better.  She asks the older guy we're interested in why he isn't married yet.  She tells embarassing stories about us in public.

It's quite possible she only befriended us because she had a thing for our ex-boyfriend.  Or she could be that co-worker in the next office who secretly resents us.

So why do we tolerate having this friend/enemy hybrid?

Maybe we both enjoy the same television shows.  Maybe she's a trust fund baby.  Maybe we wear the same shoe size - and what single girl doesn't like borrowing Louboutins from a friend's closet?

This on-going, but unacknowledged, competition and rivalry with our frenemy keeps us on par and on top of our game.  Who looks better in a bikini?  Who's dating the hotter guy?  Who has a more successful career?  Without our frenemies, we would be overweight losers eating over the sink on Friday nights.  In a sick way, she motivates us to be the best we can be.

And frankly, it's easier to be friends with a frenemy than not.  We begrudgingly endure her undermining tactics because we're nervous what could happen if we declared war on her as an actual nemesis.

After all, single girls know it's best to keep our friends close and frenemies closer.
Posted by Single Girl 1.0 at 8:01 PM

Email ThisBlogThis!Share to TwitterShare to FacebookShare to Pinterest
Labels: friends