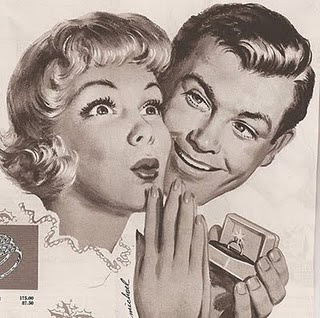 Upon hearing of a friend's impending nuptials, society deems it appropriate for single girls to squeal ecstatically, marvel at the engagement ring and squeal some more.  And so, when we receive news of an engagement to marry, single girls are obligated to play along with these social norms.

Truth be told, this performance is done with a heavy heart and some questionable integrity.

But our friend is getting married!  She has found the man of her dreams!  Why the false cheer and forced smiles?  Are we not happy for her?  Why do we feel as if we've just been told our car insurance rates are increasing?

Frankly, we want to be happy for her and we believe we are happy for her, but this news of her engagement really isn't about her. No, quite the contrary.  This is about us.  Leave it to us narcissistic single girls, upon hearing the biggest news of a girlfriend's life, to focus on what's really important: ourselves.

Obviously, there is some jealousy involved.  Our friend has found a guy who will accept her for better or for worse.  This means she can stop counting calories and throw those Spanx away!  Plus, she's sporting a new piece of jewelry on her left hand worth more than some people's vehicles.

While she's prattling on about venues, save-the-dates, flowers and gowns, we're silently resenting the situation - and not just because she can afford the Vera Wang at Saks.

We were curious to see the initial wave of our girlfriends get married immediately in their early 20s to their college sweethearts - we were all barely legal enough to purchase alcohol.  This was followed by a tolerable smattering of espousals here and there.  Eventually, engagement announcements started to spread like the swine flu and we realized that our single friends were slowly being overtaken by married friends.

When a girlfriend is married off, she becomes a unit with her husband.  I becomes a we.  When making plans with her, it's always "Let me check with the husband, WE may have his boss' dinner that night."  Worse, couples LOVE making plans with other couples.  It starts off with weekend wine tastings in Santa Barbara and turns into playdates with their toddlers.

And so, as the feigned congratulations increased, so did our fear of abandonment. We are ultimately mourning the loss of a friend to an institution that isolates single people.  How is it possible to be genuinely thrilled by this prospect?
Posted by Single Girl 1.0 at 11:50 AM