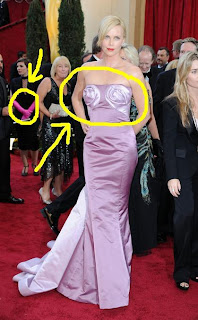 This past Sunday, single girls around the world set up camp in front of our television sets in anticipation for the celebrity-saturated night that is the Academy Awards.  And much like other single girls, I was personally invited to an "Oscar viewing party" at a girlfriend's house.  Suggested dress code?  Fat pants.  (I, of course, arrived in leggings.)

The Academy Awards have often been considered "the Superbowl for women."  If such is the case, the "post-season" also includes the Grammy Awards, Golden Globe Awards, Screen Actors Guild Awards and Independent Spirit Awards.

Do we really care who wins the trophy?  Yes, of course.  Why else do we print up faux Oscar ballots and play eenie-meenie-minie-moe choosing what we think is Best Documentary Short?  This Sunday night, especially, we all cheered as Kathryn Bigelow won Best Director over her ex-husband, James Cameron.

Otherwise, we mostly care about who wins on the red carpet.

This year, we joined Jay from America's Next Top Model and please-eat-a-hamburger, boobalicious Giuliana Rancic on E! as they used a telestrator (just like in the Superbowl!  I half expected John Madden to bust into the frame, no really) to literally point at various aspects of an actress' gown.  There is no shortage of commentary for a truly bizarre ensemble.  Remember Bjork's swan dress (with matching egg purse!) from 2001?  We're STILL talking about it!

Now, if we had to recognize one distinguishing asset of being a single girl, it's our ability to criticize to no end.  And we especially like to disparage women who are younger, thinner, prettier, wealthier and more successful than we.  (Predominantly, supermodels and actresses.)

Who is wearing Spanx?  How many Botox injections has Demi Moore had at this point?  Why didn't George Clooney get his hair cut?  Who is that awful creature with him?  And what is she wearing?  (This spawned a whole flood of snarky condemnations.)  Charlize Theron, REALLY?  Miley Cyrus, is your dress too tight for you to stand up straight?  And Vera Farmiga, you look like one big tranny mess.

Does criticism burn more calories than compliments?  We certainly hope so after that cheese and carb binge.
Posted by Single Girl 1.0 at 11:57 PM