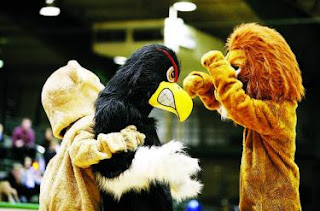 With the advent of spring fast approaching, every smart single girl knows that during this time of year, affectionately dubbed "March Madness," the best way to stay on top of our game and maintain a semblance of social relevance is to participate in our office's/buddy's/cute neighbor's pool for the NCAA men's basketball tournament.

After painstakingly filling out those brackets, wondering where in the world Wofford is or who Robert Morris was, some of you watched in sheer amazement this past weekend as powerhouses like Kansas, Villanova and Georgetown fell to much lower-seeded teams.  March madness, indeed!

Most of the country is lamenting over busted brackets, and there's probably that  random single girl currently ranked at the top of your office pool.  Why is it always the person who seemingly knows the least about basketball, let alone sports, the one who wins it all?

Honestly, most single girls don't have the time or choose not to follow college basketball at all.  (Some of us would rather be watching Gossip Girl or working on eyebrow maintenance, especially if our alma mater's team has been underperforming or going through a "rebuilding year."  Ahem, Bruins.)  So while dudes are poring over statistics on athletes and reviewing games from the regular season to select advancing teams in their brackets, single girls take a less educated approach.

With both Kansas State and Kansas, Ohio State and Ohio, Florida State and  Florida, AND several Texas schools are in the tournament, we may have a difficult time differentiating them apart and remembering what we caught on the SportsCenter ticker when we were trolling for guys at various bars, or who has been consistently ranked in the top 10 by AP and USA Today.

Some girls choose their winning teams by uniform colors, some just purely guess, and then there are those who base their decisions on how well a team's mascot would perform in a Narnian contest against the other team's mascot.  For example, pitting Washington's Huskies against Marquette's Golden Eagles is a simple decision - hypothetically, the husky could easily defeat an eagle in combat.  Despite Washington's low seed (11), they ultimately beat Marquette (6) in the first round.

Other surprising first round games included Georgetown (3) resoundingly falling to Ohio (14).  Georgetown's official "mascot" is a Hoya.  Now when you google "What is a Hoya?" you will discover its origins as a derivation of a Greek and Latin chant.  What happens when the Ohio Bobcats take on the Georgetown Hoyas?  A 97-83 roaring win for the Bobcats over a chant.  Naturally.

Murray State (13) upset Vanderbilt (4), and it is no wonder.  Although Murray State's mascot is perplexingly a "Racer," Vanderbilt students have "Mr. C," a cartoonish representation of their founder, Commodore Cornelius Vanderbilt.

As we know, it is not truly "the Big Dance" without a Cinderella - or three.  Mascot bracketology would have successfully predicted the outcome of this weekend's biggest losses.

The University of Northern Iowa Panthers (9) routed the UNLV Rebels (questionable mascot, no surprise) to take on THE top-ranked team in the tournament, Kansas' Jayhawks.  Apparently, a "jayhawk" is a mythical cross between a bluejay and a sparrow hawk.  But Panthers are the obvious winner against a bird hybrid, mythical or not.

In New York, the Ivy League was represented by 12th-seed Cornell.  Although Cornell has no official mascot, potentially causing confusion amongst mascot bracketologists, it is known as the "Big Red."  Perhaps it was this divine entity, an unknown primary color, much like the "monster" in Lost,  that defeated Temple's Owls (5) and Wisconsin's Badgers (4), in the first and second rounds respectively.

In the South, we watched as the Richmond Spiders (7) were squashed by St. Mary's Gaels (10), followed by another huge win for the Gaels against bracket-favorite, the Villanova University Wildcats.  Wildcats versus Irish people?  How does that work?  Obviously, St. Mary's unofficial mascot is Jesus, and God's right-hand man always makes a worthy adversary.

Ultimate match-ups single girls would love to see are the Blue Blob versus Big Red (a battle of the primary colors!) or a Wildcat-Wildcat challenge.  This coming weekend, will the Spartans rule over the Panthers?  Does Otto the Orange stand a chance against Butler's Bulldogs?  Will Smokey the Hound Dog sniff out Brutus Buckeye?