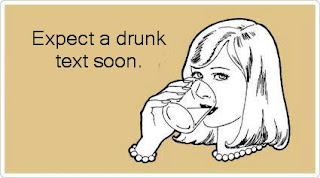 Before we continue discussing the merits of texting while intoxicated, I think we can all agree that the consumption of alcohol, a lot of it, generally exacerbates our mental state, causing most of us (boys and girls included) to be a bit more emotional than normal.  (Normal to mean "while sober" for those of us not suffering from alcoholism.)

When you say or do something out of character whilst inebriated, some may argue that "you didn't mean it."  Don't act like you have no idea that I am referring to those slurred "I love yous" and other drunken declarations of your undying love.  I actually received a drunk marriage proposal once.  He definitely did not mean it.  Or did he?

You MAY argue that a drunken text is a moot one due to temporary mental impairment.  I disagree.  Despite your diminished capacity, the content of a drunken text should not be ignored, simply because if you were able to type out a somewhat articulate message on that tiny BlackBerry/iPhone keyboard with your large mitts, then you probably had SOME semblance of coherency.

Is it any wonder that alcohol is often compared to a truth serum?  Thus, drunk words should really be considered as sober thoughts.

And that is why single girls like drunken text messages.

For the most part, single girls have just as many qualms as guys do expressing impressions and thoughts.  Thanks to modern technology and the repeal of prohibition, we can send guys a concise text message verbalizing exactly how we feel about them.  The best part is, texting generally takes up less than ten seconds of our time.

Notice how emotional stability is indirectly proportional to the amount of alcohol consumed:

The frustrating part is that dating these jerks all started from sending drunken text messages in the first place.  It's like the dating equivalent of the circle of life!

To elaborate, let's say that after a couple glasses of champagne, we are now brave enough to text back that cute boy we met at the gym or that other cute boy we met at Ralph's/Safeway.  (Alcohol makes us more clever and witty.  Clearly.)

Single girls like reciprocity.  We enjoy SENDING drunken text messages just as much as we appreciate being on the RECEIVING end.  (In more ways than one, but here I mean texting.)

A drunken text message from a guy generally means he wants to sleep with us.  We understand that he might just be looking for a late night booty call.  (This can happen if he's textually stimulating.)  And while some single girls may roll their eyes at receiving such, I don't know any single girls who are not secretly delighted to wake up Saturday morning having received drunken text messages from multiple guys between 2am and 4am.

When your beer glass is up (and emptied), your emotional guard comes down.  Those drunken text messages?  What a clever excuse to express longing and desire for us!  Maybe this latent craving actually stems from real feelings.  Maybe he truly adores us.  Maybe, just maybe, he dreams about us.  We are flattered to know he us thinking and wondering about us, especially in his inebriated state.

Somewhere in Rome, John Keats is turning in his grave.  Has the drunken text message become the 21st century love letter?
Posted by Single Girl 1.0 at 1:48 AM