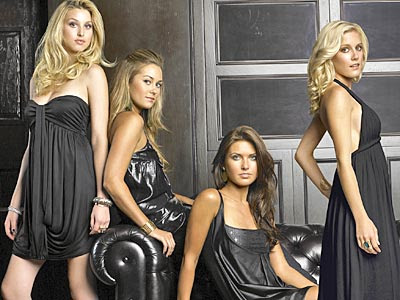 Oh my god, you guys, are you just as upset as I am that The Hills is, like, absolutely dunzo?  I mean, I would totally be wearing all black in mourning but it's, like, 100 degrees outside.  (Duuuh.)

Okay, so some of you are, like, probably thinking: Are you for real, Single Girl 1.0?  The Hills, REALLY?  You're college educated (so?), and aren't you a little too old to be watching that stuff?  First of all, shut your face.  Secondly, just because I'm old enough to remember when MTV used to, like, actually show music videos, it doesn't mean I'm "too old."  Whateveeeer...

You see, guys, The Hills is kind of a big deal.  It's, like, a cultural phenomenom recognized by legitimate publications such as Rolling Stone and important people like the President of the United States.  I KNOW!  Obama watches The Hills!  HUGE, right?  I wonder if he hosted viewing parties in the White House like I did?  (Hey, senators, take a drink everytime Lauren rolls her eyes!  Or have a shot when the cast arrives at an SBE-owned nightclub or restaurant!)

The reason why single girls like The Hills is because the producers created something that we can actually RELATE to.  I mean, that show about pregnant 15 year olds is, like, totally gross and crazy, and My Super Sweet 16 is just ridiculously tacky (and makes us jealous that our dads aren't billionaire record producers, those lucky bitches).

The Hills is essentially OUR lives, reenacted by thin, young, surgery-enhanced blonde chicks.  (And the token brunette.  What's up, Audrina!)  All of the drama we've sustained with frienemies, boyfriends, girlfriends, girlfriends' boyfriends, etc, is, like, ALL there - in neatly packaged, 30-minute episodes.  It's like the producers read our diaries or weblogs.  Or something...

The Hills is basically a disclosure of what we single girls truly are: emotional masochists with a penchant for unneccessary theatrics, douchebags and expensive designer shoes.  Seriously, think about it.

Remember that episode when Justin Bobby told Audrina he would go to a party with her, then said he couldn't go to the party and she was, like, understandably, a little upset so he "surprised" her and showed up with his completely inappropriate combat boots ON THE BEACH?  And then they got into a fight and he ended up leaving ANYWAY and then disappeared on her for DAYS.  Oh.  My.  God.  So frustrating!  That, like, totally reminded me of a "Justin Bobby" I used to date.

And let's not forget the "Brody Jenners" of our dating repertoire.  You know, that guy who is a total player and gets away with hooking up with our girlfriend after he breaks up with us because he is "Brody Jenner."  And because he is "Brody Jenner," we remain friends while not-so-secretly pining after him.  Meanwhile, he is, like, dating Playboy models and ex-wives of punk rock musicians, and all we can do is sit next to him in a booth at a club giving him the stink-eye over the rim of our martini glass while he checks messages on his Blackberry.  (I know!  Why does it always have to be so complicated?)

In true single girl style, every piece of dialogue spoken on The Hills was, like, incredibly intense, not to mention poignant.  And reflective of our own lives, not everything said was as articulate as it could have been.  Example: "He's a sucky person!  I hate Spencer, I will never like Spencer!"  Wow, LC, that was, like, really sucky.

But then she would redeem herself with gems such as: "The only thing left to do is forgive and forget.  I want to forgive you and I want to forget you."  Oh, snap!  So harsh, but totally something I'd want to say to a girlfriend who was getting married to a guy who spread nasty rumors about me that were published, like, in Us Weekly.  Yeah, I KNOW.

Even Audrina - sweet, sorta cross-eyed Audrina with the perpetually vacant stare - once told Justin Bobby: "You're gonna be incapable of loving someone.  You're gonna grow up and be a lonely, old man.  I hope you do fall in love someday 'cause then maybe you'll actually feel something."  You tell 'im, Audrina!  Although I wonder how many times she had to practice that speech...

You know how sometimes you, like, find yourself in a situation where you just pause for a moment and think: "Huh.  This is my life."  Like that time when Whitney got to model an Oscar dress on television on television?  (Not being redundant, she was being filmed being filmed on a TV show for a TV show.)  Remember how she tripped walking down the stairs?  During a LIVE BROADCAST?  Oh my GOD, that would totally be, like, something I would do.  I felt for her during that episode, I really did.

Or that time when Lauren ruined the Givenchy dress she borrowed for the Crillon Ball in Paris and had to hustle back to the store for a new one?  I, like, TOTALLY felt for her in that episode.  No, really, I did.